DOMINATION - THE DEATHFEST: A BRIEF HISTORY

It all began with this one festival called Domination - The Deathfest, popularly known as 'Deathfest'. We're talking about the year 2000 here, when India's first ever extreme music festival came into being. The idea behind Deathfest was formulated by none other than Nitin Rajan (Primitiv) and his ex-band members Roshan Kumar (bass/vocals) and Hitesh Ghelani (drums) of former Mumbai death metal band Morticide


Prior to 2000, the year Domination - The Deathfest kicked off, there was no concert/show or festival that solely showcased metal bands. There were many 'rock' shows happening though, that would occasionally have a metal band play. Besides that, other thrash and heavy bands of the time rarely got an opportunity to play at major festivals, except a few college festivals here and there, and the rare gigs at Razzberry Rhinoceros, more widely known as 'Razz Rhino', the pioneer venue for the initial metal phase in Mumbai. The lack of opportunity in the existing local circuit led to the conception of the first extreme metal fest - the idea behind it being to stage some local as well as outstation bands. This helped people know and listen to metal bands from different parts of the country. The lineup in 2000 had opening act Demonic Resurrection, Nemesis, Fate (all three from Mumbai), Blasphemy from Chennai, Yama, Kryptos and Threinody from Bangalore and Morticide (Mumbai).

Many other bands played the four editions of Deathfest back in the day like Exhumation, Acrid Semblance, Disembodied Corpse, Intestinal Butchery, Arcane Ritual, Belial, Abhor, Myndsnare and more. There was a website back then for Deathfest, with sections for comments, much before days of Gigpad and RSJ forums!

Here are some fond memories of the first ever Domination- The Deathfest, told by members of bands that played the festival.

"Deathfest was pretty awesome because back then we were just kids and every outstation gig was like some sort of epic adventure. On top of that, it was really cool to hang out and get wasted with the guys in Fate and Morticide. We hit it off really well and some of us are still friends to this day.  I think those early Deathfest gigs in Mumbai really left their mark on a lot of people because a lot of us still talk about them to this day."

"At the time, it was great to know that there was a fest only for metal bands. It was one of those 'underground' gigs."


"After all the times I'd been to Mumbai,  this time I was going with a band to Deathfest.  It was completely fucking insane. I was 16 and in the band and had never seen anything like it. The place was packed with wild headbangers. I remember after our set, someone even split his head open by hitting it on my monitors. Back then we had never seen energy like that before!"

"Deathfest was awesome. Blasphemy slaughtered that evening. They didn't have a bassist, so their guitar player Sanjay played bass. Their drummer Nat did a mad drum solo with double bass and all. That guy was the most awesome death metal drummer I ever heard in India. I remember we didn't have any sound issues, we just climbed onto the stage and killed it! After that, we went back to the Royal Orchid. That was the first time, and most probably the last time we'll ever be put up in a five star hotel! Basically, what followed was a contest in youthful stupidity. From drunken dry heaving in a bath tub, fake pimp calls and crawling races down the hall, it was plenty of fun!"

It was also the first time ever that any metal festival kicked off with the concept of a tour/gigs in multiple cities in India. Apart from Mumbai, the fest took place in Pune and Bangalore. Unfortunately, Deathfest lasted for four years. In 2004, the core members of Morticide started migrating to foreign countries. Nitin alone found it difficult to take complete responsibility and handle the festival by himself, as playing in a band and doing gigs was priority over organizing a festival. Domination - The Deathfest, therefore took the back seat and sunk into history, for a bit. After Morticide had practically dissolved, Nitin joined Reptilian Death for a brief period of time (two or three gigs) and then Sledge (2005 onwards). He was always in touch with the Mumbai scene.

'Resurrection', another extreme metal fest, an initiative by Sahil Makhija later almost replaced Deathfest and compensated for that need for a metal fest. There were editions of Resurrection, nine to be precise, the last one being in 2010 at Hotel Bayview in Gorai, Borivali. It was a temporary venue when Razz shut down and nothing much was really happening besides college festivals and some shows like Independence Rock and the likes. Nitin was convinced that Resurrection was continuing the metal fest culture. "Resurrection took the mantle post-Deathfest and later B69 provided the regular gigging platform for metal bands, so I was quite pleased and did not feel the need to restart the festival." he said.

These two festivals had made an impact and left everyone with something to pick up from. Although, that wasn't simply the end for Deathfest. "Later in 2009, I realised that with many metal genres and sub-genres, emerging bands playing death metal and other allied genres were not getting many gigs. This is when I decided to get Deathfest back!" added Nitin. Nitin and Riju Dasgupta (Albatross, Primitiv) were the driving force behind the revival, along with the industrious Yash Gill and Vineet Sharma (Nocturnal Art) for the artwork. Riju came into the picture only in 2013. "Deathfest wouldn't have been possible without Riju." said Nitin. 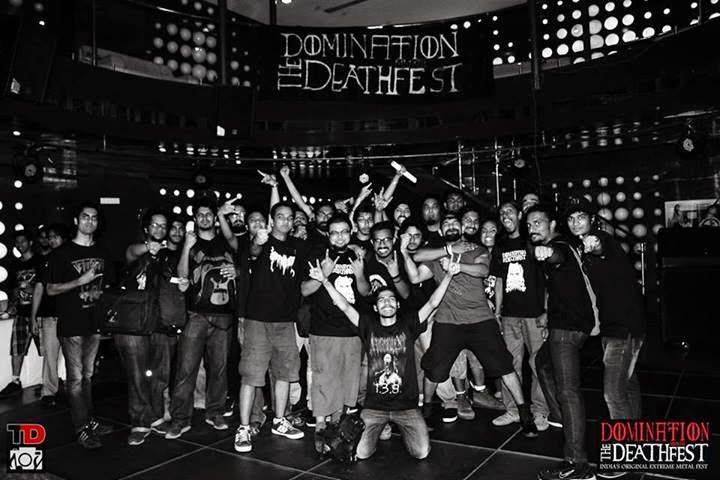 2013 witnessed the revival of the first extreme music fest, when the fifth edition took place at United 21 in Thane, Mumbai. The lineup comprised of Exhumation, Gutslit, Witchgoat, Insane Prophecy, Atmosfear, Orion and Reptilian Death. Since B69 shut down, United 21 and Blue Frog are the only two venues who host metal gigs on a more frequent basis. Thrashfest and more recently, Transcending Obscurity fest also took place at United 21.

This year, 2014, Domination - The Deathfest will once again take place in two cities, Mumbai and Hyderabad. Nitin acquainted with organizer Philip Baiju a few times in the past, and thought it would be great if Deathfest happened in Hyderabad, since there was nothing happening there right now in terms of gigs. With a dedicated crowd, Deathfest will take place on the 21st of June, 2014 in Hyderabad.

Mumbai will also have something called the 'Death Metal Legion' where a collection of favourite death metal songs will be played by our generation of musicians, like an all-star concept, paying tribute to death metal legends.

Domination - The Deathfest has come a long way, encouraging and establishing a platform for extreme metal music, and yes, all of us hope to see many more years in this festival's future! \m/

This is the official page for Domination - The Deathfest.

(Look at the links below for the lineups as well)
The sixth edition of Domination - The Deathfest will take place in Mumbai on the 8th of June, 2014, so RSVP HERE
Hyderabad leg, RSVP HERE